ABB drive gets laundry back in business 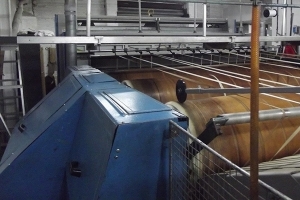 A commercial laundry in Scarborough, North Yorkshire, is achieving more reliable speed control of a key machine following the installation of an ABB variable-speed drive.

Park Laundry, established in 1885, is Scarborough's largest commercial laundry. A critical process is the calender ironing machine, which is usually in operation for nine hours a day depending on seasonal demand.

The machine was originally operated using an old slip ring motor, with speed control provided by an auxiliary servo motor. With spares becoming harder to source, the company was considering replacing this motor when it suffered a sudden failure.

Says McHugh: “The ironing machine is a bottleneck process for us – it was vital that we got it up and running again as all the washed items have to go through it.”

The machine consists of a feed-in belt section that sends newly washed items to three 18 inch diameter heated metal rollers, driven from the motor by a chain. These iron the items and send them to the final section for folding. Speed control is vital as the items vary in size from domestic towels and clothing, to commercial laundry items from hotels and restaurants such as napkins, table cloths and king sized bed sheets. These hold different amounts of water and although they are spun dry, they are still damp so need to be ironed at different speeds.

The drive solution supplied by Halcyon Drives incorporates a 15 kW ABB general purpose, ACS550, variable-speed drive together with sensors on the feeder and folder that feedback to the drive to synchronise the roller speed. The drive was also supplied in an enclosure rated to IP54 to prevent the ingress of moisture from the damp working environment of the laundry

“It was much more viable to replace the motor than repair it as it gives us a much more efficient motor,” says McHugh. We are also very pleased with the speed of the installation. Once we had decided we needed to replace the motor and install the drive, the job went ahead very quickly and we had the entire new system in place and operating in nine hours.”

Halcyon Drives integrated the ABB drive with the existing controls, making it easy for the machine operators. “The new set up has exactly the same controls as the old one,” Staff sometimes move around to work different machines so it saves a lot of hassle and time if they are still familiar with how the machine speeds are altered.”

As well as the improved reliability and better availability of spares, the new drive and motor combination is also more efficient than the previous arrangement, though as they have been installed only a short time, it is too early to tell how much they have saved in energy costs although the first electricity bill after installation is noticeably reduced, some due to working less hours but some definitely due to improved efficiency of the unit.

Other benefits of the new drive and motor include cooler running and a lower noise level.

“Overall, we have been very pleased with the way the project has gone; Halcyon Drives and Eclipse did not waste time and have provided us with a very good solution.”

More in this category: « ABB drives help regulate temperature in pig farms Baking a better biscuit with variable speed drives »
back to top