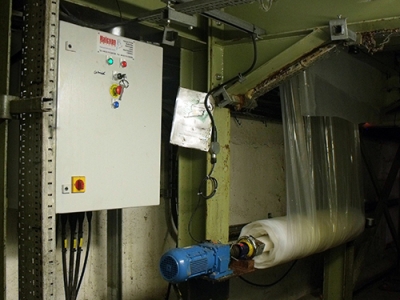 Avoiding a potential £1,500 per hour of wasted product is being achieved using an ABB variable speed drive.

Kemira Chemicals of Bradford makes special polymers for use in the water treatment industries.

During the manufacturing process the polymers go through a chemical reaction, breeding on a continuously moving conveyor belt. During this part of the process, it is vital that the polymers do not come into contact with the conveyor belt or the batch will be ruined.

To prevent this occurring, a roll of polythene sheeting is unwound and laid on top of the conveyor allowing continuous growth of the polymers.

At the end of the line the polymers are granulated and the polythene sheet is recovered using a re-reeler a cardboard core onto which the polythene is wound as it comes off the tail end of the conveyor. It is driven by a geared motor unit and controlled via a variable speed drive.

Kemira was having trouble with its existing drive, which was becoming obsolete and not easy to program. Steve Sanderson, Manufacturing Improvement Engineer for Kemira, says: "It is vital to keep a constant torque to give a winding speed of 15 metres per hour. Because the old drive was not easy to program, it was difficult to set the torque correctly. This caused the polythene to stick to the belt, ruining the batch and leading to a loss of production of some £1,500 per hour, so it was essential we solved the problem."