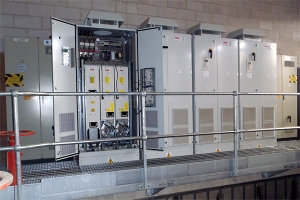 A wastewater treatment plant in Bradford is saving over £61,000 on energy costs following installation of ABB variable-speed drives on its re-circulation pumps.

The filter recirculation pumps at Yorkshire Water’s Esholt Wastewater Treatment Works are used to pump final effluent to the filter distribution chamber, diluting the effluent and providing the required wetting rates for the filters.

There are three 180 kW, fixed-speed recirculation pumps on site, which were operating as duty/ duty/ standby. Normal operation was for two pumps to be operated continuously providing a recirculation flow of approximately 1,000 litres per second. Operating the two pumps this way cost £235,000 per year.

Recent operational changes at the site have meant that the load to the filters is substantially reduced and some of the filters have been de-commissioned. As part of its plan to reduce electricity consumption by seven percent by 2015, Yorkshire Water wanted to review the flow rates of these pumps to determine if there was any scope for savings.

Investigations revealed that the pumps were efficient enough, but led to suggestions that flows could be reduced to make an annual saving of £23,500. More detailed process calculations indicated flow reduction should be possible giving a calculated saving of £50,800 per annum.

Mick Hawksworth, Plant Engineer for Esholt, says: “Halcyon Drives are one of our preferred suppliers and we chose them for this project because of the convenience of working with them. For our energy projects, we look for a three year payback period. When we put together the business case for this project, the payback time improved on that goal so it was a definite bonus.”

The project involved installing 200 kW ABB low harmonic variable-speed drives (VSDs) on the three recirculation pumps. The project included building and supply of the drives in panels to replace the existing soft start units and installation of insulated bearings on the existing motors. A steel walkway in front of the new VSDs was also needed, as the increased depth of the panels meant that access to the existing layout was restricted.

Once the installation was complete, which took four days, a programme of trials was started, which included reducing the speed of the VSD driven pumps at a pre-determined rate and monitoring the effect for two weeks. On each step of the reduction, power readings were taken to assess the savings that would be achieved on an annual basis if the pumps were continually operated at that speed.

The final speed at which measurements were taken was 45 Hz, which would produce a saving of £61,324.

Added Hawksworth: “As well as the main benefit of energy saving, the VSD project gives us more operational control. The flow is used as dilution flow and incoming loads could possibly change in the future. Using the VSDs gives us the flexibility over and above simple fixed speed operation.”

“I have a good working relationship with Halcyon and they have provided good support to me on several occasions. I get a very honest opinion from their engineer, in whom I have a great deal of trust and professional respect.”

More in this category: University cuts carbon emissions by over 809 tonnes a year using drive technology »
back to top