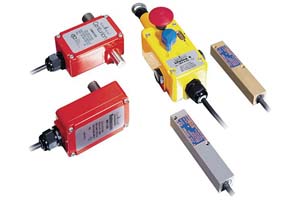 The Guardmaster™ Ex Range of safety switches from Rockwell Automation are specifically designed for potentially explosive atmospheres. They retain the safety features and operating principles of the conventional Guardmaster switches. They incorporate a sealed flameproof contact block, making them suitable for use in European Zone 1 and Zone 2 environments. In the US and Canada, these products can be used in areas classified as Class 1, Division 2 in Groups A (acetylene), B (hydrogen), C (ethylene) and D (propane). All the Guardmaster Ex switches conform to the exacting standards required by the European harmonized standards. The contact block in these switches has the following approvals: 112G EExd IIC T6 or T5 and 11 2D T80°C IP 66.

The d suffix indicates that the contact block in the switch is a flameproof enclosure and is designed to ensure that if an internal explosion occurs it will be contained with the enclosure. The designation II indicates use in surface industries and c refers to the group of gases for which the switches are suitable. The designation T represents the surface temperature classification of the switch. These switches have been tested with an ambient temperature of 60°C as opposed to the normal test limit of only 40°C, allowing them to be used in gases having a low flash point.

It should be noted that these groups refer to the explosion-proof qualities of the switches and not corrosion-resistance characteristics. Special precautions may be required to protect the vulnerable parts such as PVC-covered cables against attack by certain corrosive elements and physical damage.