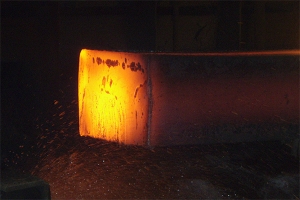 A specialist steel manufacturer in Rotherham is set to save £68,000 a year on the energy costs of pumping applications following the installation of five ABB ACS800 industrial drives.

Tata Speciality Steel produces 800,000 tonnes of speciality steels for customers with demanding applications in aerospace, oil and gas, power generation and the manufacture of industrial bearings.
Halcyon Drives an ABB Drives Alliance member supplied, installed and commissioned three, 90 kW and two 75 kW ABB industrial drives to control critical pumping applications at the plant. Rated at IP55 to stop the ingress of dust and moisture, the drives with in-built intelligent pump function, multi-pump control, ensures that the optimum number of pumps is running to satisfy the process demand and brings a backup pump online in the event of a pump failure.

As part of its energy saving plan, Tata identified its flume flush pumps and filter feed pumps as prime candidates for energy efficiency improvements. During production, hot steel billets are cut by a gas cutter, generating waste which flakes off the billet. The three 90 kW flume flush pumps are used to flush water across the billet to carry this waste away. Whilst in production, two flume flush pumps run continuously. This waste is filtered out of the water, which is then returned to the process via a holding tank, known as a clear well, by three 75 kW filter feed pumps.

All these pumps were originally driven by motors running direct-on-line, with no form of speed control and with only simple logic control to determine how many pumps needed to operate. Another drawback was that because the flushing water was not controlled by demand, much of it was sprayed beyond the cutting area, resulting in a lot of wastage.

Tata’s team of engineers carried out their own investigation, which indicated that controlling the pumps by variable-speed drives would provide significant savings. In particular, the investigation on the filter feed pumps showed that only two pumps would be needed to meet the demands of the recirculating water system. One of these pump sets will be removed and used as a spare. 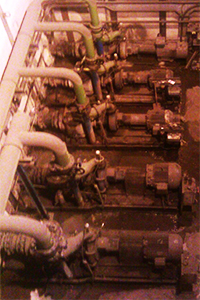 Halcyon Drives installed a hire drive on the pump applications to confirm the potential savings. On the filter feed pumps, the current was logged for a full day on one pump under the existing flow control system, in which two pumps are run with a flow control valve to maintain the clear well level at 60 %.

Results showed that with two pumps running, annual energy used was over 355,000 kWh, at a cost of over £46,000 per annum. A variable-speed drive was then installed on one of the pumps and this was set up to maintain the clear well level using a level transducer. The flow control valve was forced fully open so that it wouldn’t restrict flow. It was found that a single pump under variable-speed drive control was able to maintain the clear well level. Energy use fell to just over 131,000 kWh per annum at a cost of £8,500. Savings on this application were calculated at £37,600 per annum.
For the flume flush pumps, a similar exercise showed that energy use would fall from 565,000 kWh to 323,000 kWh, with costs falling from £73,500 to £42,000, a saving of over £31,000.

Total savings were calculated to be £68,000 a year once the ABB drives were fitted permanently. The expected return on investment is around 13 months taking into consideration all associated costs.

Ben Holroyde, Tata’s Project Planning Engineering, a member of the team responsible for implementing energy saving schemes says: “We choose energy saving projects based not only on the actual energy and money saved but also on their commercial viability. We look for schemes that will pay back within two years so for a project to pay back in such a short time was phenomenal.

“We have a good working relationship with Halcyon and we were very pleased with the project, with the permanent drive installation fitted in six weeks. As well as the energy savings we will make, noise has also been reduced in the area, giving better working conditions for maintenance staff.”

More in this category: « Cooling Tower Fans - Energy Saving
back to top